He pulls the hammer from the mountain's grip
The sign for demons to attack
He's been called upon to arise and he won't spare a single life
No, Thor (won't) spare a single soul, nor let them get away alive
They strike down on the world with overwhelming force
All resistance is brutally crushed, crushed without remorse
Dark angels descend to join the bloodfight
The slaughter brings them on, see Odin's Valkyries ride

He rides once more upon the black mountain of doom
Holding firm the Crusher of giants' bones
He lets the hammer strike, now everything will burn
As Surtur's fire is released upon the world 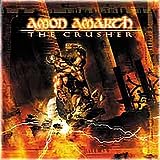