Where secrets lie in the border fires
In the humming wires, where you know you're never coming back
Past the square, past the bridge
Past the mills, past the stacks

You've got no self-respect, you feel like an insect
Well don't you worry, buddy 'cause here he comes
Through the ghetto and the barrio
And the Bowery and the slums

You'll see him in your head and on the TV screen
Hey buddy, I'm warning you to turn it off
He's a ghost, he's a god
He's a man, he's a guru 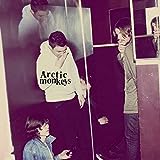