Still got pictures of friends of the wall
Suppose we aren't really friends anymore
Maybe I shouldn't ever have called that thing friendly at all
Get freaked out from a knock at the door
When I haven't been expecting one
Didn't that used to be part of the fun once upon a time?

It stays between us, Steinway and his sons
Because it's the Ultracheese

I've still got pictures of friends on the wall
I might look as if I'm deep in thought
But the truth is I'm probably not, if I ever was
Oh, the dawn won't stop weighing a tonne 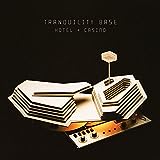