Well I lost my taste for the company of airports and cars
We flew through the year and
Avoided the dust and rock.
We stood in the way of the tank till we bored and stopped
So never show doubt in your hand
Till you know what they got

Touch me or don't
Just let me know,
Where you've been

Well drop me a line with a hook and some raw bleeding bait
(One, two, three, four)
Well I'm uncaught and still swimming alone in the lake
(Five, six, seven, eight)
Shimmering under the moon made of anger and hate
I was the one who was always repeating it
Shimmering like a penny out of reach in the subway grate
(Shimmering like a coin kept safe away,
You'll never listen to anything) 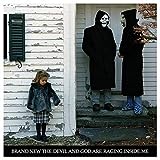