Tabloids, bellowing raw delight
Hail the return of the Teutonic Knights
Inbred for purity and spoiling for a fight,
Another little puppet of the New Right

See-through dollars and mystery plagues
Varied detritus of Aquarian Age
Shutters on storefronts and shutters in the mind -
We kill ourselves to keep ourselves safe from crime.
That's the gospel of bondage...

We're so afraid of disorder we make it into a god
We can only placate with state security laws
Whose church consists of secret courts and wiretaps and shocks
Whose priests hold smoking guns, and whose sign is the double cross
But God must be on the side of the side that's right
And not the right that justifies itself in terms of might -
Least of all a bunch of neo-nazis running hooded through the night
Which may be why He's so consipicuously out of sight
Of the gospel of bondage...

You read the Bible in your special ways
You're fond of quoting certain things it says -
Mouth full of righteousness and wrath from above
But when do we hear about forgiveness and love?

Sometimes you can hear the Spirit whispering to you,
But if God stays silent, what else can you do
Except listen to the silence? if you ever did you'd surely see
That God won't be reduced to an ideology
Such as the gospel of bondage... 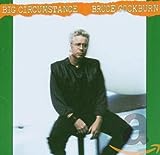