CAMEL
"Down On The Farm"
(Sinclair)

Every Sunday morning, before daybreak
Down upon the farm, on the fishpond
All the little ducks, they go paddling
Look out for fish or for breakfast

There's such a lot to be done on the farm
In the sunshine, and when it's lunchtime
It's hop down the pub for a pint
Back on the tractor to finish the plowing

Standing all alone, Fred the scarecrow
Hasn't got a clue how the wheat grows
Doesn't mind the rain, hates the cold though
Specially when those icewinds blow snow

All along the lane, bees are buzzing
Little furry things in hedgerows swirring
In amongst the corn the bunnies are bouncing
Roosters spring upon their feet

Down here on the farm

It's a lovely day for country walking
The vicar's on his bike, Vinny's skateboarding
The farmer and his dog out back shooting
The gun goes off and birds stop tweeting

Lost dog sneaks around the farmyard
Great big pile of sh..t behind the rhubarb
Sitting in his pram, baby bunting
Dogs are up and starts his grunting

Give him a drink, he's gone pink
Wants his mummy, needs changing I think
Such a lot can be done on the farm
In the sunshine
And when it's lunchtime
It's hop down the pub for a pint
Sneak out the backway with Nelly the barmaid
To the woods 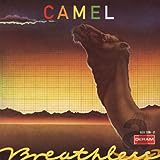 CAMEL videos - Down On The Farm