[Fresh Prince:]
Uh uhh, ahh! Ughhhhhhh
Yo Jeffrey! Bust it..
What are ya doin in there?
Word em up word em up word em up
In the place at about this time
DJ Jazzy Jeff and the Fresh Prince just bu bu buggin out
Losin it all, no sense
Ay Jeff, scratch it, scratch it man, scratch it!
[Jeff scratches]
Ughhhhh.. aw that was decent
Now scratch it, a quick joint, a quick one Jeff
[Jeff scratches]
Ooooooh yeah! Yeah!
We just buggin, we just havin some fun
Me and Jeffrey
He's the DJ, I'm the Rapper
Hello.. can anybody hear me?
You can? Aight that's good, you can hear me?
OK it's clear? It's good? OK everybody's got it?
One.. two..
One, two, and..

My rhymes have been written, not to be bitten
But as it seems, some suckers keep forgettin
The rules about rappin, but that's alright
Cause in the next five minutes I'ma have them all uptight
Stronger than a dinosaur, better known than Santa
Man - the battles I battle, I usually win em
In - less than a minute, but it all depends
On how long - it takes you rappers to realize
That tryin to defend yourself, is ridiculous
Didn't you get my message inside of the question
Cause you're toys boys, I'm the Real McCoy
I'm really gonna enjoy seein you destroyed
If I was Fred Flintstone, I'd probably own all of Bedrock
If I was a criminal I'd probably own a cellblock
If I was in the Navy I would own the sea
But I'm a +POET+ so I own the whole rap industry
I'm like a lion my man, and the streets are my den
It's either kill or be killed, so I kill
I kill again and again and again
The X amount of times, rappers I'll slaughter them
I tie em up and throw them in the water
Then I'll just walk away like no-thin ever happened
Until somebody else starts rappin
That's when I snap and I'll attack and go mad like Rambo
Or maybe like Commando, or like Lando
Calrissian, cause you know he was down with the Force
Fresh Prince is the source I feel no pain or remorse
Think that you can beat me rappin man you must be silly
Man I really really really really really really
Hate when people, doubt my ability
And I have to prove superiority
If rap was basketball, I would be in luck
Cause everytime I freestyled it would be a slam dunk
MAN, I'm the engineer, and you're the passangers
Takin on a voyage, a hip-hop massacre
The Jason of rap, Freddy Kruger of rhymin
And I'm sure that you'll see in due time man
People will run, to Philadelphia Pennsylvania
To all join in, to this Fresh Prince mania
My face in magazines, on your radio or stereo
Everywhere you go, audio and video
A hip-hop terrorist, war like vocalist
Other rappers say, "Yo Prince why don't you show me this
Style now," you must be trippin
It ain't no way in hell I'ma let you put your lip in
My rhyme cause it's a timebomb, I'm not kiddin
My rhyme explodes the second it gets bitten
I'm quick and nimble, a status symbol
I shop at Macy's now but I used to shop at Gimble's
I'll, drop kick a hurricane, bodyslam a tidal wave
Walk through a tornado, or a volcano
But I'll be OK though
And here's some more info that you rappers should know
You are the bombs and I will defuse you
I am the lawyer and I'm goin to accuse you
Of the ultimate rhyme crime, and you will be guilty
There's no way that you'll ever ever defeat beat me
Rappin any time of day
Pop so much trash, man I can't wait
To be face to face, and hear Jeff say, "Sick 'em"
Man you're gonna be my victim
You better duck, and pray for good luck Chuck, cause you're stuck
You're like a Thanksgiving turkey and it's time to be plucked
I see you're nervous purpose that's how I now you're soft
You're runnin round like a chicken with your head cut off
But just relax my power to the max
And I'm cuttin no slack on this rap track, Jack
So back up, as if you got good sense
OR FEEL THE FURY.. of the Prince!
And ya don't stop
Yo Jazzy, why don't you rock up the spots
Yo Jazzy, hey Jeff I'm psyched, I'm psyched
Give em a cut Jeff
[Jeff scratches]
Ooooooh-weeeeeee! Check out my dish-jockey!
Ay Jeffrey Jeffrey Jeffrey, a fast one
[Jeff scratches]
Uh-huh, yeah, uh-huh, uh-huh, uh-huh
[Jeff scratches]
Wow, ay Jeff Jeff, give em one of them fresh ones
A fresh one Jeffrey
[Jeff scratches]
No music, no music
[Jeff scratches]
Wooooooo, that was decent, that was decent
That's my DJ, that's my DJ
Jazzy Jeff, I'm the Fresh Prince {*echoes*}
Hi {hi} how ya doin?
How's everyone doin out there?
OOOOOOOOOH!
[Jeff scratches]
I'm just here to talk about my DJ
I was just I was just standin in here, really
Really? Aight, okay, umm
On behalf of DJ Jazzy Jeff, and the Fresh Prince ..
.. "Groove then get down!"
[Jeff scratches]
Thank you, and good night {*echoes*} 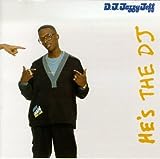