[Jazzy Jeff on the phone:]
Hello?
Yeah, I talked to him
Whoa, whoa..
Nah, you ain't got to explain nothin to me
See, you tried to play my man and end up playin yourself
Later for you
Nah, matter of fact later for you
And your golddiggin girlfriend you put me down with)

[The Fresh Prince:]
This story that I'm about to tell ya
Is all about this girl named Daliah
5'7", a Gucci queen
With gold all over that flowed like a stream
I met her in a club on a Saturday night
The girl's jeans were tight and I got hype
I thought about talkin to this little miss
But I kept seen guy after guy gettin dissed
Every guy that cracked got flagged
But somethin kept sayin (you) (you) (you bad)
I walked up and asked her to take a ride
I whispered in her ear, said, "My car's outside"
At first she laughed and said, "Nah, not yet"
Then I told her it's a 'Vette and she said "bet"
"Under one condition: you gotta let me drive it"
She kissed me on the lips and I said (you got it)

[The Fresh Prince:]
Oh what sweet music she and I made
Only I was gettin dissed while she was gettin paid
Everything that I owned, she took it
All the way down to my foodstamp booklets
I was contemplatin her bein my wife and
All she was tryin to do was syfin
Every single dime that she could extort
She was Jane the Ripper, and she couldn't be caught
My friends tried to tell me but I stood behind her
(The girl ain't nothin but a 49er)
They tried to tell me but I couldn't be told
Because her beauty was a shovel that was diggin for gold
Diamonds and furs, I spent all I had
And took her shoppin every day at Sack's 5thve.
Visa, Mastercard and even Discover
She told me this is the way that I can show her I love her
My friends tried talkin to me, they tried stoppin me
(If she had a gun they'd arrest her for robbery!)
I knew she was playin me for every dime
But I loved when people said (Homes, your girl is fine)
But then one day, yo, I got wise
I found out she was messin with a couple of guys
She told me that she loved me but I guess she forgot it
Oh, you wanna play hardball, huh? (You got it)

[The Fresh Prince:]
The final night that I caught this girlie
I was out of town and I came home early
I caught her in a club kissin some guy Fred
Stormed up right behind her, grabbed her and I said
"Yo Daliah! What's up, baby?
Come on, you got to be crazy
That's your cousin? You think I'm a nut?
What kinda cousin would you let put his hand on your butt?
Nah girl, you done got out of hand
And it's about to seem like I'm the repo man
You vacumed all of my funds like a rug
But you stretched the cord too far, you pulled the plug
Let's what? Come on, it's too late to talk
It's like monopoly and I bought Cedar Boardwalk
But tomorrow you'll wake up and talke a look
And think the stockmarket crashed on your pocketbook
But it's over, now I want everything
All the way from Louis Vuiton bags to earrings
Especially the solid gold earring noodles
And the diamond watch, the whole kitten kaboodle
Don't tell me I'm trippin
Oh, you got amnesia now, you're forgettin
Who did what for who, I gave my all to you
I can't seem to see why you did wrong to me
I finally figured out what you're about
But it's the bottom of the night, two strikes and two outs
You can go make a sucker of another fellow
It's 12:01, let's give it up, Cinderella
I ain't goin for it, stop cryin
Like Ms. Melodie said: I ain't buyin it
Game over, girl, you finished clockin
You wanted your walking papers? (You got it) 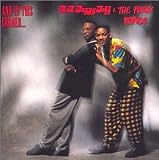 D.J. JAZZY JEFF & THE FRESH PRINCE videos - You Got It (Donut)