He's usually slightly bigger, or stronger than the average
And has a friendly attitude, an outgoing personality
The leader among adolescents is likely to remain a leader through later life
Sometimes his father wonders if he's alright, mentally
He feels safer saying nothing
At least then he can't say the wrong thing
Psychologists call it a negative phase
This is a common method of self-protection
Subconsciously, he's looking for acceptance and help with his problems
But mother has learned that these things are usually temporary
The less said about them, the more quickly they wear off
Unlocked
Unlocked
Un-Unlocked
It is impossible to anticipate when the two monsters will attack next
I wanna introduce you to the

Zeltron out the Barrio, cold as Ontario
These niggas hysterical, I'm historical
I- (Are you serious)
I'm the oracle, I been know what's in store for you

And all this has been just the beginning 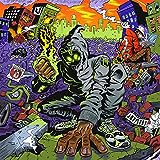