DON HENLEY
"No, Thank You"

These are hard times we're living in
Nobody cuts you any slack
We got Space Age machinery, Stone Age emotions
Today a man had better watch his back
Everybody's selling somethin', the baron and the bumpkin
A man has got to fight for what is his
If what they're offering to you looks too good to be true
You can bet your bottom dollar that it is

No, thank you
I don't think so
I think I'm smellin' a rat
Don't tell me what you're gonna do for me
'Cause I've been there done that

Lady Luck's been good to me
I'm as grateful as can be
Never thought this crazy ride would ever last
And though nostalgia is fine, I respectfully decline
To spend my future living in the past
I've been carrying my load down this same old rocky road
Every day I'm getting deeper in a rut
Workin' overtime, now a dollar's worth a dime
And everybody wants a bigger cut

No, thank you
I don't think so
You must think I'm blind as a bat
I sure appreciate what you're tryin' to do for me
But I've been there, done that

B.S. blaring from the radio, the TV
Hot wind blowin' off The Hill
It's a mystery to me we can't agree to disagree
It's lookin' like we never, ever will

Like a drunkard in the night, swingin' left and swingin' right
Republican or Democrat
Well, I ain't got no love for none of the above
'Cause I've been there, done that

No, thank you
I don't think so
It's a little too pat
Don't tell me to take it easy
'Cause I've been there, done that 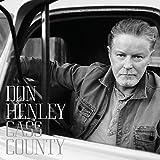 DON HENLEY videos - No, Thank You