You know I remember when I was a younger man used to travel by Greyhound bus.
We used to call that ridin' the dog. where you could go from one big city to the next.
On your way, sometimes you stop in these little country cafes, where you could get
A bite to eat, cut of coffee, do some personal business, and maybe something else
Goin' on in there.

Well, that's what this song is about
We call this one Serious Doin' Woman, and fellas, she was

Sitting in a diner in Georgia, on the highway leading out of town
Having me a bowl of red beans and rice and two beers just to wash it on down.
It was a hot sultry day as I remember, the sun was relentless at best
She walked and upset the place in a plain tight cotton dress 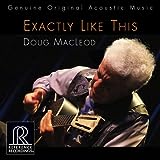