EMINEM
"In Your Head"
(Marshall Mathers)

I'm packin' up my shit, as much shit in the car as I can fit
And I'm just drivin' as far as I can get
Away from these problems till all of my sorrows I forget
What's tomorrow like? 'Cause tonight I'm startin' life again

Get to the corner and stop, fuck am I goin'?
Besides psycho when I fantasize startin' my whole life over
Yeah right, oh and I might go and
Get hypnotized so I don't even recognize no one

I try to look alive because there's nothin' like holdin'
Your head up high when you're dead inside and I just hide, so in
Case you're wonderin' why my inside's showin'
'Cause I done spilled all my guts and those are mine so I'm

Pickin' 'em up and stuffin' 'em back
Fuck it, I've done enough in this rap shit
Recovery brought me nothin' but back
To where I was and perhaps
This coulda been my victory lap if I wasn't on the verge of Relapse

It seems to be the reoccurring main thing
The shit I would daydream as a kid, I was eighteen
I went from an irate teenager to still raging
Isn't it though amazing, back then I put anything

Into the rhyme, whether it was sad, mad, happy or angry
I spit it, the mainstream, I hit it
Yay me, I did it! Did what?
Hailie, baby, I didn't mean to make you eighty

It's the craziest shit I
Ever seen, and back then it was like I ain't even
Bothered taking into consideration
You one day being older and may hear me say things
I did it, pay me, and be, it just ain't me

Okay, so ladies and gentlemen let's strip away everything
And see the main reason that I feel like a lame piece of shit
Or should I sound cranky and bitter
Complain, beef and bicker 'bout the same things

'Cause when I look at me, I don't see what they see
I feel ashamed, greedy
And lately I've been contemplating
Escaping to get away and go wherever this road takes me
It's making me crazy what's in my 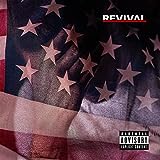 EMINEM videos - In Your Head