[Verse One: Erick Sermon]
When I came out with my first rap jam
I had no idea that the record would slam
It did real good without radio play
Maybe at night but no airplay in the day
I couldn't understand why to be exact
Our music was good and I was far from wack
Then came the answer, commercial was the key
To get airplay and a spot on TV
Like Ed Lover and Doctor Dre from Yo! MTV Raps
A show, mainly for the black
And still we can't ill, 'cause to them that's wrong
'Cause like P.E. said, we're too black and too strong
But hey, what can I say
(Brothers and sisters) that's a price a rapper must pay

[Verse Two: PMD]
As airwaves collapse rap shows at a standstill
Some racial circuits the frequencies can't handle
The funk tracks produced by EPMD
But it's a fat jam, that will never win a grammy
Unless we sellout and kill the black movement dead
Which means swallow our pride and become flunkies instead
And stop the rap about freedom, thoughts of a black president
And rap about a black crack, the mayor in our residence
Give me a break brothers, it's time to take a stand
And kill that no sir, yes sir, and thank you ma'am
'Cuz the word is a luxury a black man can't afford
That's why poverty's on the rise and we still ignored
And it's a setback and yet the clock still ticks
And if we let it, rap would be run by politics
I read it somewhere that every man's created equal
But not in this day and age, maybe in the sequel
Which means next time, so observe these rhymes
And take a stand and go for yours 'cause I'm going for mine
That's why I

[Verse Three: Erick Sermon, PMD]
Why is that when wrong is done by the black
It's blown out of proportion and immediately attacked
By the press and yes, conflict is caused
By the kids at concerts who bumrush the doors
One child gets hurt, the press gets pesty
But what about the Beatles, G, and Elvis Presley
Same stuff was rough, rap does not 'cause violence
So (Fight the Power) and make them understand
But too much power and you might get banned
So if you want airplay
You can't be too black and hey, watch what you say, but ayo 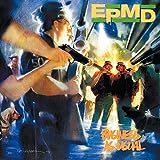 EPMD videos - Give The People