[Erick Sermon] (Parrish Smith)
Yeah, uh-huh
Uh-huh
Ah y'all know what, that is, yo, uh-huh (E-Dub)
Uh-huh, uh-huh, y'know what that is, word up
(Wax and tax em) The Squadron, PMD, Erick Sermon
(Millenium Ducats) Yo, yo.. uh-huh
Def Jam

[Erick Sermon]
Excuse me! I'm tryin to earn a mere buck or two
Yo my name's E-Dub, so who the fuck are you?
I'm lockin it down now, and that's that
I'm the bigga nigga, supreme vigor figure with cap
Hold your gat, I can't control the sound
If the beat grabs you up, then hold yourself down
Captivates, give it raw to the kick and snare
Like UHH-HUH.. YEAH YEAH..

[Parrish Smith]
I love it when my jewels dangles
Could see stars, like the Bangles
When you approach me, adress me as Mr. like Bojangles
Death Decepticon, bad intentions when we reppin on
Microphones, step in the set and start flexin on
Your big man, don't lose focus and watch the quicksand
Kill the drama, my nigga lean on cats, like a kickstand
Fuck it, Erick and Parrish Millenium Ducats
Fully flossed out, two G's, Fisherman bucket

Chorus: EPMD [2x]
Who? EPMD got checks to cash
What what? Drop bombs for the clubs to blast
When? Right now, so my crew could flash
Where? Right here, get the money and stash

[Erick Sermon]
Aiyyo what's that song, that got the average dude
Playin the fool, hittin the bong with Cheech and Chong
What? Me and Mic Doc rock the spot like we're up
With more technique, than Bruce Lee with num-chuks (wha-TAH)
Pure player, my rap flow's athletic
Workout seven albums - rap calisthetics
EPMD now.. here to getcha
With a blow, you coulda sworn Roy Jones hit ya

[Parrish Smith]
Cats can't hold me, Erick and Parrish, we hold the trophy
Scorn your team all day so I suggest you change your goalie
'Cause I'm hype again, with E Double, on the mic again
Crack a 40, spark a L, then pop a?Perkadan?
Straight off tiggy, ridin shotgun with my niggy
No diggy, E and P tight like Lenny and Squiggy
Sundullah, no one cooler than the rap ruler
And to the cats out there frontin, yo, you can't fool us

[Erick Sermon]
Aiyyo, stop, drop, and roll, we on fire
And we won't stop rockin til we retire
Who said we _Out of Biz_? That there was a liar
I'm Sammy Sosa, and P's Mark McGwire
Home run hitters, with black tar beneath the eye
If you wanna hate me, do it now, try
I'm lethal, take it back to EPMD third album
And do it _For My People_

[Parrish Smith]
I jump out the plane and hanglide
Hit the ice and slip-slide
Niggas don't get it, EPMD status, correct me if I'm
Mistaken, currently record breakin and still bakin
Like Kevin to Footloose only difference we keep the sytsem quakin
Dusk to dawn, word is bond
You fuck with EPMD, Erick and Parrish, the shit is on
'Cause we roll with a street team that donate posters
Quick to roast ya
Run up with the gat cocked back, clap, and smoke ya 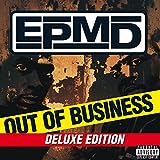