[Erick Sermon]
Yeah
Something has to be said
Uh
Somebody tell me something
Whats up?

[Parrish Smith]
That it's on right now and we about to let off
And that the industry is sleepin and HipHop is soft
EPMD is the boss like Rick Ross
We don't knock or ring or else we kick down the door with force
Bust you down, leave a sign on you that say you lost
Game over, no more quaters, plus the machine is broke
Money don't really remember nothing, all he has seen is smoke
No witness, no statement, no case
Incorporate you eat cheese, then you get a raise
Rubbed out return to the earth
Six feet deep in the dirt
With the snakes and maggots 'cause you got murked

[Erick Sermon]
Yeah, and they keep telling me that
You're only as good as your last record
And if I was to do something now they wouldn't second
Hardcore respect it and that is enough
You got more props then call your bluff
Same thing happend to Marry and Mariah
They both came back with fire, fuck retiring
I got belts around my waist
You keep holding your pants up
Homeboy male up!
That's your opinion, 'cause you're not feeling it
How you know they're hot the fans not hearing it
The record pins steering it in one direction
You, there is some music in the real niggas section

[Parrish Smith]
That EPMD is a corporation it's not its the group
And that they always stack paper so put up your loot
Ghetto celebs that's why niggas salute
Orange juice and grey goose
We dramatic backwards now that P is loose
Me and E is back for the kill, no troops
That's why we spit the real in the vocal booth

[Keith Murray]
Now he from the BX but he really soft
And he from BK but his guns don't go off
He from cop killer Queens but he still getting robbed
And he from money making but he ain't on his job
Now he from LA but he's scared to bang
And he from Texas but he will do the damn thing
He'd stay in VA but he is scared of the streets
And he's from Chi-a but he's sweet as a peach
I can tell you 'bout the dope fiends and all of that
But I let them tell it 'cause they sell their moms crack
And that ain't gangsta that is wanksta
Went to jail and the homo shanked ya
Don't get caught between my city and the moon
You'll be screaming at night, you loose your life at me to doom
I really hung with BIG, squared off with Pac
Shook hands in the House of Blues before the shit popped
First fought niggas in the industry and kept it cool
You ain't see me running my mouth in no interviews
And you fools on them DVD's waving tools
No that ain't something that a gangsta do 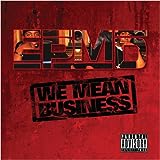 EPMD videos - They Tell Me