EPMD
"You're A Customer"
(EPMD)

[Erick Sermon]
Knick knack patty whack give a dog a bone
Yo, don't give him nothing but a microphone
Don't stop, I'm not finished yet
You said I'm not the E, you wanna make a bet?
Remember this: Lounge, you in the danger zone
I figured you would, now leave me alone
You pick and you wish on a four-leaf clover
To be the E double E over and over
You're intrigued by the way I do my thing
(Do what?) Pick up the mic high and make it swing

[PMD]
I have the capability to rap and chill
Cold wax and tax MCs who tend to act ill
It's like a Dig'em smack
You smack me and I'll smack you back
I get goosebumps when the bassline thumps
A sucker MC arrives, now it's time for lunch
When I'm cooling on the scene, I notice one thing
I'm not Bounce, so sucker MCs cling
I consider myself better than average
Yo, I rock the mic like a wild beast savage

[Erick Sermon]
I'm in the bottling state, I can't concentrate
I make a move like chess, then I yell "checkmate"
You know why I get zanier and zanier?
Because of EPMD mania
When I walk through the crowd I can see heads turning
I hear voices saying "That's Erick Sermon"
Not only from the women, but from the men
You know what? It feels good, my friend

[PMD]
I'm the P double E, the Thrilla of Manila
Better known as the MC cold killer
PMD's goal is to keep the place jumping
And if not we feel we owe you something
It's like lotto, you have to be in it to win it
But if the beat is fresh then Diamond J will spin it
If J spin it, then it has to be def
To make you dance until there's no one left

'Cause you a customer

[Erick Sermon]
Praying like a prey when the fox in action
I smell blood, no time for maxin'
Camouflage in the green, my back is arced
Plus you in trouble 'cause it's after dark
My eyes close like Steve Austin, I got you in the square
I would let you run, nah, that ain't fair
So I clear my visions so I can spot him
Snatch him by the neck and say "Hmmm I got him"

[PMD]
My neighbor MCs, you're in over your head
My rhymes are hungry plus they haven't been fed
The process of elimination is quite simple
Let you grow like a blackhead and pop you like a pimple
Slice you like lettuce, toss you like a salad
Revoke your MC license if your rhyme's invalid
As we go on, sucker MCs sound wacker
Like a parrot says "Polly want a cracker"

[Erick Sermon]
Well it was a regular test, nothing we can't handle
At our house they have the mics on the mantel
Looked at the DJ and said "May I?"
Lit it up like the Fourth of July
Because I float like a butterfly, sting like a bee
No, I'm the E of EPMD
I have a strong point of view on the way things run
Just shut up and listen and learn my son

[PMD]
Absorb that ass like Bounty, the quicker picker upper
To tell you up front, you're nothing but a sucker
The style we're using, no doubt copastetic
You try to bite and yet sound pathetic
'Cause I'mma rhyme like a tailor, flow like a sailor
As the beat gets stronger, MCs get staler
Not bragging or protagging, surely not fagging
MCs surrender, raise the flags and
Give up the titles 'cause the signs are vital
I keep a voice tuned at a slow and swift idle

And you a customer

[Erick Sermon]
I need a man meal sandwich, yes I need Manwich
I feel good, now it's time to do damage
I feel like battling, you know what I mean?
When I rhyme one time to release the steam
When I grab the mic I get dramatic like an actor
You know why I get over? I'm the master
I do a show, pack it in 'til it's clamming up
Look for the microphone then I jam it up

[PMD]
You said you see me jamming at New York Tech
You got one right fella, you deserve a check
How did you know? You must have been jocking
How would you know the places I be rocking?
Don't follow me fella, every move that I make
I'm hostile now so I'll give you a break
Research upon me but don't go past the limit
Here's my card and on the back is my fan club digits

[Erick Sermon]
There's two things to check out in the words that I'm saying
Plus listen to the guitar playing
The bro is bad, the strings he's plucking
Fire rhyme after rhyme, watch MCs duckin'

[PMD]
MCs, it's the final countdown
You look tired, can you go the round?
If you can, I'll slap your hand and give you credit
And if not, I'll turn around and say "Forget it" 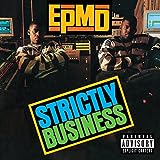 EPMD videos - You're A Customer