EVERY TIME I DIE
"Imitation Is The Sincerest Form Of Battery"

Don't try to resist, you're coming with us
Provisions are made, accommodations have been met
Your words are encoded in the bleak genetics of the mob
Praise apocrypha - omitted offense - to relieve us of guilt but not of our sin
We've sacrificed discourse at the feet of your clever turn of phrase
Now you owe it to us, we demand to be taken aback
To be shown the revival of hope for which your words are responsible

Oh, it's the end of the line
I'm cornered by a precedent
The sneering public eye
My job here is done

Retract the accolade
The candid acclaim
Inspiration is cutting its loss
Regurgitate headlines or a theory on modern art
You've been fooled again, the red herring's a joke

Oh, it's the end of the line
I'm cornered by a precedent
The sneering public eye

It is better to destroy than to create what is meaningless
So the picture will not be finished. Goodnight 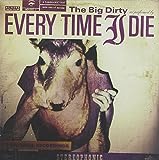