Now, one day, now I believe it was on a Tuesday, a man in a checkered double-knit suit drove up in a large El Dorado Cadillac, leased from BOB SPREEN . . .

("Where the freeways meet in Downey!")

. . . And he laid a HUGE, BULGING ENVELOPE right at the corner of BILLY THE MOUNTAIN, that was right where his 'foot' was supposed to be.

Now, BILLY THE MOUNTAIN, he couldn't believe it! All those postcards he'd posed for, for ALL OF THOSE YEARS, and finally, now, AT LAST, his Royalties!

Yes, BILLY THE MOUNTAIN was RICH! Yes, and his eyeball-caves, they widened in amazement, and his jaw (which was a cliff), well it dropped thirty feet!

A bunch of dust puffed out! Rocks and boulders hacked up, (hack! hack!) crushing 'The LINCOLN'!

I gave him the money
He acted real funny
He hocked up a rock and
It TOTALLED my car!

Oh, do you
Know any trucks
Might be bound for THE VALLEY?
I don't wanna stand here
All night in this bar
(Dear Lord)

I don't wanna stand here
All night in this bar
(No shit!)

I don't wanna stand here
All night in this bar!

By two o'clock, when the bars are already closed down, BILLY had broken 'THE BIG NEWS' to ETHELL. And with dust and boulders everywhere, BILLY, choked with excitement, announced . . .

"ETHELL, we're going on a VACATION!"

But first they were gonna stop in LAS VEGAS . . .

It's off to LAS VEGAS
to check out the lounges
Pull a few handles,
And drink a few beers,
(Oh, ETHELL!)

ETHELL, my darling,
you know that I love you!
I'm glad we could have a
Vacation this year!
(Oh, NEET-O!)

Glad we could have a
Vacation this year!

They left that night, crunchin' across the Mojave Desert . . . their voices echoing through the canyons of your minds (POO-AAH!)

"ETHELL, wanna get a cuppa cawfee?"

The first noteworhty piece of real estate they destroyed was EDWARDS AIR FORCE BASE . . .

And TO THIS VERY DAY, 'Wing Nuts' and Data Reduction Clerks alike, speak in reverent whispers about that fateful night when TEST STAND #1 and THE ROCKET SLED ITSELF . . . (We have ignition!) . . . got LUNCHED! I said LUNCHED! (Lunched!) By a FAMOUS MOUNTAIN-IN and his SMALL, WOODEN WIFE.

"Word just in to the KTTV News Service undeniably links THIS MOUNTAIN and HIS WIFE to drug abuse and pay-offs as part of a San Joaquin Valley SMUT RING! However, we can assure parents in the Southern California area that a recent NARCOTICS CRACK-DOWN, in Torrance, Hawthorne, Lomita, Westchester, Playa Del Rey, Santa Monica, Tujunga, Sunland, San Fernando, Pacoima, Sylmar, Newhall, Canoga Park, Palmdale, Glendale, Irwindale, Rolling Hills, Granada Hills, Shadow Hills,Cheviot Hills, will provide the SECRET EVIDENCE the Palmdale Grand Jury has needed to seek a CRIMINAL INDICTMENT, and pave the way for STIFFER LEGISLATION, increased FEDERAL AID, and AVERT A CRIPPLING STRIKE of Bartenders and Veterinarians throughout the INLAND EMPIRE . . . "

WITHIN THE WEEK, Jerry Lewis had hosted a Telethon ("Wah wah wah, nice lady!") to raise funds for the injured (injured . . . ) and homeless (homeless . . . ) in Glendale, as BILLY had just levelled it, and, a few miles right outside of town, BILLY caused a 'Oh Mein Papa' in the Earth's crust, right over the SECRET UNDERGROUND DUMPS (right near the 'Jack-In-The-Box' on Glenoaks) where they keep the POOLS OF OLD POISON GAS, and OBSOLETE GERM BOMBS, just as a FREAK TORNADO cruised through . . .

"Somewhere over the rainbow, bluebirds fly . . . "

. . . sucking up two thirds of it (SUCK! SUCK! SUCK!) for UNTIMELY DISPERSAL over VAST STRETCHES of WATTS!!!

Now, unless I misunderstood, it was right outside of Columbus, Ohio when BILLY received his NOTICE TO REPORT for his INDUCTION PHYSICAL. Now, lemme tell ya, ETHELL said, now ETHELL, ETHELL said she wasn't gonna let him go!

"THAT'S RIGHT! We now have CONFIRMED REPORTS from an INFORMED ORANGE COUNTY MINISTER, that ETHELL is still an ACTIVE COMMUNIST, and it is This Reporter's Opinion that she also practices (COVEN!) WITCH-CRAFT!"

It was about this time that the telephone rang inside of the SECRET BRIEFCASE belonging to THE ONE MORTAL MAN who might be able to stop all of this senseless destruction and save 'AMERICA HERSELF'! (And I'm sorry to disappoint some of you, it was not Chief Reddin) This one MAN was STUDEBAKER HOCH, fantastic new SUPER HERO of the CURRENT ECONOMIC SLUMP.

(Oh) Now, some folks say he looked like (he was like, he was like) ZUBIN MEHTA (Zubin Mehta); still others say (others say he), bullshit, honey (bullshit, man) he's just another greasy guy who happened to be born next to the Frozen Beef Pies at BONEY'S MARKET. (Others say he was just a, just a) Still others say, John, piss on you, Jack! (crazy Italian) He's just a crazy Italian who drove a RED CAR. You see (nobody knows for sure 'cause he was so), nobody ever really knew for sure, because STUDEBAKER was so-o-o-o-o-o mysterious (mysterious) . . .

'Cuz when a person gets to be
Such a HERO, folks,
And MARVELOUS BEYOND COMPUTE,
You can never REALLY TELL
About a GUY LIKE THAT
(Whether he's really a NICE PERSON
Or if he just SMILES A LOT),
(What?)
Or if he has a son named 'PINOCCHIO',
Or what?

Whether he's really a NICE PERSON or if he has a son named 'PINOCCHIO' or what?

So when the phone rang
In the secret briefcase,
A strong masculine hand
With a Dudley Do-Right wristwatch
And flexy bracelet
GRABBED IT
And answered
In a deep, calmly assured voice:

SOME MEN SAY HE COULD DANCE!

They said he could DANCE, and, of course, THEY were right! Ladies and Gentlemen, this is it: THE STUDEBAKER HOCH DANCING LESSON & COSMIC PRAYER FOR GUIDANCE featuring Aynsley Dunbar, hit it!

STUDEBAKER HOCH can write THE LORD'S Prayer on the head of a pin!

He was born next to the BEEF PIES,
Underneath JONI MITCHELL'S autographed picture,
Right beside ELLIOT ROBERTS' big Bank Book,
Next to the boat
Where CROSBY flushed away all his stash
And the cops
Got him in the boat and drove away
To THE CAN
Where Neil Young slipped another disc

(And that was the main influence on HIM!)

The influence of a Frozen Beef Pie!

Boldly springing into action, he phoned his wife (who ran a modeling school), WHEREUPON HE . . . yes, HE ran around the back of 'THE BROADWAY' at Hollywood Boulevard and Vine to see if he could find himself some big large, un-used cardboard boxes (no shit!)

After which, he hit up the RALPH'S on Sunset for some 'AUNT JEMIMA SYRUP', some 'KAISER BROILER FOIL', and a pair of blunt scissors! Hey-hey!

Then he took those 'WINGS' and wedged one under each of his powerful arms and sneaked into a telephone booth . . .

YES!! Yes! And then he SHUT THE FUCKING DOOR! And he pulled down his blue denim policeman type trouser pants, and he spread even amounts of AUNT JEMIMA maple syrup all over the inside of his legs!

Soon the booth was filling with flies!

He held open the legs of his boxer shorts so they could all get in (Yes! Yeah!), and when each and every one of those little cocksuckin' flies had gone into his pants, and they were lapping up all that maple syrup, he bent over and he put his head between his legs and he said in a very clear, impressive, RON HUBBARD-type voice . . .

. . . and the booth and everything lifted up, out of the parking lot, and into the sky!

He's coating his legs
With AUNT JEMIMA syrup up and down!

His shorts'll be filled with flies
That will be buzzing all around!

He could be a DOG
Or a FROG
Or a LESBIAN QUEEN!

He could be a NARK
Or a LADY MARINE!

Or he might play dirty!
He's OVER THIRTY!
(Getting old? Say! I don't know!)

And speaking of mountains, we'll join STUDEBAKER HOCH on the edge of BILLY THE MOUNTAIN's mouth. Take it away:

"Ya, well listen, you (cough cough) . . . listen, you COMMUNIST SON-OF-A-BITCH! You better get your ass down there for your fuckin' physical, or I'll see to it that you get used for FILL DIRT in some impending New Jersey MARSH RECLAMATION . . . and your girl-friend there will wind up disguised as a series of brooms, primitive ironing boards (or a DOG HOUSE) . . . get the (cough, cough), GET THE PICTURE?"

Unfortunately, because STUDEBAKER HOCH was standing on the edge of BILLY THE MOUNTAIN's mouth when the giant mountain laughed, STUDEBAKER HOCH lost his footing and fell, screaming, two hundred feet into the rubble below!

Oh, listen, that only goes to show you, and it'll show you once again that . . .

(Eddie, are you kidding?)

Eddie, are you kidding? 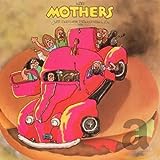