A boring old garage in a residential area with a teenage
band rehearsing in it. JOE (the main character in the CENTRAL
SCRUTINIZER'S Special Presentation) sings to us of the trials
and tribulations of garage- band husbandry.

JOE:
It wasn't very large
There was just enough room to cram the drums
In the corner over by the Dodge
It was a fifty-four
With a mashed up door
And a cheesy little amp
With a sign on the front said
"Fender Champ"
And a second-hand guitar
It was a Stratocaster with a whammy bar

At this point, LARRY(a guy who will eventually give up music
and earn a respectable living as a roadie for a group called Toad-O)
joins in the song...

LARRY:
We could jam in Joe's Garage
His mama was screamin'
His dad was mad
We was playin' the same old song
In the afternoon 'n' sometimes we would
Play it all night long
It was all we knew, 'n' easy too
So we wouldn't get it wrong
All we did was bend the string like...

Hey!
Down in Joe's Garage
We didn't have no dope or LSD
But a coupla quartsa beer
Would fix it so the intonation
Would not offend yer ear
And the same old chords goin' over 'n' over
Became a symphony
We would play it again 'n' again 'n' again
'Cause it sounded good to me
ONE MORE TIME!

We could jam in Joe's Garage
His mama was screamin', "TURN IT DOWN!"
We was playin' the same old song
In the afternoon 'n' sometimes we would
Play it all night long
It was all we knew, and easy too
So we wouldn't get it wrong
Even if you played it on a saxophone
We thought we was pretty good
We talked about keepin' the band together
'N' we figured that we should
'Cause about this time we was gettin' the eye
From the girls in the neighborhood
They'd all come over 'n' dance around like...

ONE TWO THREE FOUR
LET'S SEE IF YOU GOT SOME MORE!

People seemed to like our song
They got up 'n' danced 'n made a lotta noise
An' it wasn't 'fore very long
A guy from a company we can't name
Said we oughta take his pen
'N' sign on the line for a real good time
But he didn't tell us when
These "good times" would be somethin'
That was really happenin
So the band broke up
An' it looks like
We will never play again...

JOE:
Guess you only get one chance in life
To play a song that goes like...
And, as the band plays their little song,

MRS. BORG (who keeps her son, SY, in the closet with the vacuum cleaner)
screams out the window...

MRS. BORG:
Turn it down! Turn it DOWN! I have children sleeping here...
Don't you boys know any nice songs?

JOE:
(Speculating on the future)
Well the years was rollin' by
Heavy Metal 'n Glitter Rock
Had caught the public eye
Snotty boys with lipstick on
Was really flyin' high
'N' then they got that Disco thing
'N' New Wave came along
'N' all of a sudden I thought the time
Had come for that old song
We used to play in "Joe's Garage"
And if I am not wrong
You will soon be dancin to...

CENTRAL SCRUTINIZER:
The WHITE ZONE is for loading and unloading only. If you gotta load or
unload, go to the WHITE ZONE. You'll love it...

MRS. BORG:
I'm calling THE POLICE!
There! I did it! They'll be here...shortly!

OFFICER BUTZIS:
This is the Police...
We have the garage surrounded
If you come out with your hands up
We guarantee you won't be harmed
Or hurt, neither (SWAT Team 4, move in!)

CENTRAL SCRUTINIZER:
This is the CENTRAL SCRUTINIZER...
That was Joe's first confrontation with The Law.
Naturally, we were easy on him.
One of our friendly counselors gave him
A do-nut... and told him to
Stick closer to church-oriented social activities. 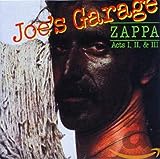