The Muffin Man is seated at the table
In the laboratory of the Utility Muffin
Research Kitchen . . .
Reaching for an oversized chrome spoon
He gathers an intimate quantity of dried muffin remnants
And brushing his scapular aside
Proceeds to dump these inside of his shirt. . .
He turns to us and speaks:
"Some people like cupcakes better. I for one
Care less for them!"
Arrogantly twisting the sterile canvas snoot
of a fully charged icing anointment utensil
He pools forth a quarter-ounce green rosette (oh ah yuk yuk.
let's try that again . . .!)
He pools forth a quarter-ounce green rosette
Near the summit of a dense but radiant muffin
of his own design.
Later he says: "Some people . . . some people like cupcakes exclusively,
While I myself say there is naughl nor ought there be
Nothing so exalted on the faceof God's grey earth
As that prince of foods . . . The Muffin!" 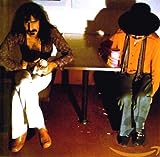