Got damn, I'm glad ya'll set it off.
Used to be hard, now you're just wet and soft.
First you was down with the AK,
and now I see you on a video with Michel'le?
Lookin' like straight bozos.
I saw it comin', that's why I went solo.
And kept on stompin',
when ya'll mothafuckers moved straight outta Compton.
Livin' with the whites, one big house,
and not another nigga in site.
I started off with too much cargo,
dropped four niggas now I'm makin' all the dough.
White man just rulin'.
The Niggas With Attitudes -- who ya foolin'?
Ya'll niggas just phony,
I put that on my mama and my dead homeys.
Yella Boy's on your team, so you're losin';
Ay yo Dre, stick to producin'.
Callin' me Arnold, but you Been-a-dick;
Eazy E saw your ass and went in it quick.
You got jealous when I got my own company,
but I'm a man, and ain't nobody helpin' me.
Tryin' to sound like Amerikkka's Most,
you could yell all day but you don't come close.
Cuz you know I'm the one that flown,
ya done run 100 miles, but you still got one to go.
With the L-E-N-C-H M-O-B, and ya'll disgrace the C-P-T.
Cuz you're gettin' fucked out your green by a white boy,
with no vaseline...

The bigger the cap, the bigger the peelin',
who gives a fuck about a punk-ass villain?
You're gettin' fucked real quick,
and Eazy's dick, is smellin' like MC Ren's shit.
Tried to tell you a year ago,
but Willie D told me to let a hoe be a hoe, so
I couldn't stop you from gettin' ganked,
now let's play big-bank-take-little-bank.
Tried to dis Ice Cube, it wasn't worth it
cuz the broomstick fit your ass so perfect.
Cut my hair and I'll cut them balls,
cuz I heard you're, like, givin' up the drawers.
Gang-banged by your manager, fella,
gettin' money out your ass, like a mothafuckin' Ready Teller.
Givin' up the dollar bills,
now they got the Villain with a purse and high-heels.
So don't believe what Ren say,
cuz he's goin' out like Kunte Kinte,
but I got a whip for ya Toby;
used to be my homey, now you act like you don't know me.
It's a case of divide-and-conquer,
cuz you let a Jew break up my crew.
House nigga gotta run and hide,
yellin' Compton, but you moved to Riverside.
So don't front, MC Ren, cuz I remember when you drove a B 2-10.
Broke as a mothafuckin' joke.
Let you on the scene to back up the Verse Team.
It ain't my fault, one nigga got smart,
and they rippin' your asshole apart.
By takin' your green, oh yeah,
the Villain does get fucked with no vaseline.

I never have dinner with the President.
I never have dinner with the President.
I never have dinner with the President.
And when I see your ass again, I'll be hesitant.
Now I think you a snitch,
throw a house nigga in a ditch.
Half-pint bitch, fuckin' your homeboys.
You little maggot; Eazy E turned faggot.
With your manager, fella,
fuckin' MC Ren, Dr. Dre, and Yella.
But if they were smart as me,
Eazy E would be hangin' from a tree.
With no vaseline, just a match and a little bit of gasoline.
Light 'em up, burn 'em up, flame on...
till that Jheri curl is gone.
On a permanent vacation, off the Massa plantation.
Heard you both got the same bank account,
dumb nigga, what you thinkin' bout?
Get rid of that Devil real simple, put a bullet in his temple.
Cuz you can't be the Nigga 4 Life crew
with a white Jew tellin' you what to do.
Pullin' wools with your scams, now I gotta play the Silence of the Lambs.
With a midget who's a punk too,
tryin' to fuck me, but I'd rather fuck you.
Eric Wright, punk, always into somethin', gettin' fucked at night.
By Mista Shitpacker, bend over for the gotdamn cracker, no vaseline... 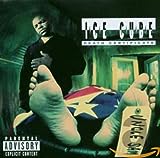