[Ice Cube:]
Peace - don't make me laugh!
All I hear is motherfuckers rappin sucotash
Livin large, tellin me to get out the gang
I'm a nigga, gotta live by the trigger
How the fuck do you figure?
That I can say peace and the gunshots will cease?!
Every cop killer goes ignored
They just send another nigga to the morgue
A point scored- they could give a fuck about us
They rather catch us with guns and white powder
If I was old, they'd probably be a friend of me
Since I'm young, they consider me the enemy
They kill ten of me to get the job correct
To serve, protect, and break a niggas neck
Cuz I'm the one with the trunk of funk
And 'Fuck tha Police' in the tape deck
You should listen to me cuz there's more to see
Call my neighborhood a ghetto cuz it houses minorities
The other color don't know you can run but not hide
These are tales from the darkside...

You wanna free Africa, I stare at yuh
Cuz we ain't got it too good in America
I can't fuck with them overseas
My homeboy died over a key of cocaine
It was plain and simple
The 9mm went

[Chuck D:]
Standing in the middle of war
In the middle we flex
When we die, we won't make +Jet+
+Ebony+ can't see to the lightside
The term they apply to us is a nigga
Call it what you want, cause I'm comin from the coroner
Sayin my rhymes with a Ph.D.
Who's black - don't wanna role - sells his soul
Watch his head go rollin
Who the fuck are they foolin?
Nobody knows, but I suppose the color of my clothes
Matches the color of the one on my face
As they wonder whats under my waist
[Standin on the verge] of them gettin brown
Thats a fact got a fear on their bozack
Run, run, run, their ass off, they can not hide
Yet Cube, they can't fuck with the darkside! 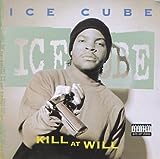