And restriction and shit we can't do
They blame it all on us
I'm blamin' em for gangsta rap because if they didn't create
This kind of condition I wouldn't have shit to rap about!
You know what I mean? 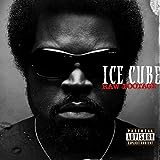