An organization made up of highly motivated
Extremely aggressive gangstas turned businessmen
With one single objective, world domination
Or in their words, creating a world wide Westside

Vowing to make every man, woman and child bow down to the W
A hand sign used by their members to show affiliation
We have confirmed reports that W's have been appearing on
Various monuments and historical landmarks throughout the world
And also talks of Mount Rushmore being renamed as Mount Westmore

With America's forefathers being replaced by
The Westside Connection forefathers
Ice Cube, WC and Mack 10
A.K.A., The Gangsta, The Killa and The Dope Dealer

When confronted with these allegations
They released a statement saying
"Bitch, you know the side, world motherfucking wide" 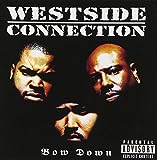