IGGY POP
"A Machine For Loving"

I helped him to settle on my lap
For a few seconds he looked at me
With a curious mixture of exhaustion and apology
Then, calmed, he closed his eyes
Two minutes later he gave out his last breath 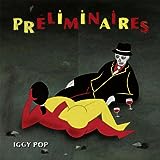