IGGY POP
"I Won't Crap Out"

I'm standin' in a shadow, hating the world
I keep a wall around me, block out the herd
It's a nerve-wreck placeto be, it kills real quick
You gotta scrape the concrete off your dick 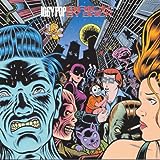