IMELDA MAY
"Hellfire Club"
(Imelda May)

There's a place by the walls
Up in the hills, looking over at the Liffey
It's hidden away
A secret den just outside Dublin city
A house of sin a debauchery, for many a year gone by
Women
Drinking
Gambling
Or anything you might try

The story goes that on one night a game of cards was played
A knock on the door and entered in a man of wealth in spades
He stayed and played one hell of a game but when one card fell loose
Upon bending down, a player saw the strangers feet were hooves

The Devil's at the head of the table
Don't run, 'cause you won't be able
If you enter, you'll never leave
Your soul, you'll never retrieve

Another one goes, that a farmer boy
Went to sneak a peek
Curiosity got a hold of him
His self control was weak
He was found and suddenly dragged inside
And when he reappeared
His hair was white, with the fright
He was deaf and dumb with fear 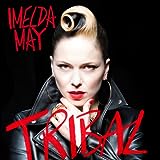