JACKSON BROWNE
"Where Were You"

Where were you in the social order?
The Lower Nine or a hotel in the Quarter
Which side of the border between rich and poor?
Where were you going to evacuate to?
Assuming there was any way to
Where, if you didn't own a car?
Where were you?

Where were you when you understood
However decent, however good
However hard some people try
They only barely make it by
They're born, and live their entire lives in harm's way

Where were you when you heard the stranded,
The injured and the empty handed
Were running out of food and water at the Superdome?
With the newborn and the elderly
Exposed to even more misery
While those in charge of rescue
Waited for the Guard to come
And those who left the Convention Center
Were stopped on the bridge when they tried to enter
The safety of the west bank, and higher ground
And when the Guard finally did arrive
And got to work on about day five
Mainly they were used to keep the looting down
Where were you?

Where were you when you realized
However strong, however wise
However true our leaders appear to be
When they talk about prosperity
However hard this country strives
If property is valued more than lives
How strong will we ever really be?
How long do we imagine we'll be free?

We hold the truth self evident:
The photograph of the President
From Air Force One, he views the devastation
Shaved face, rested eyes
Looking down, he circles twice
On his way home from his vacation
Where were you, when you got the picture?
Where were you?
Where were you when the streets filled up with black water? 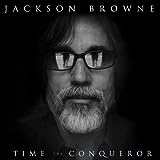 JACKSON BROWNE videos - Where Were You

Home > B > JACKSON BROWNE > Where Were You lyrics