JIMMY WEBB
"What Does A Woman See In A Man?"

He stinks to high heaven, half covered with hair
And grunts just like some old orang-utan
While she smells of clean skin and a trace of jasmine
And speaks like a first rate librarian

His stomach hangs out, there's a hump on his back
He eats like Conan the Barbarian
While she keeps herself trim, and her posture is prim
Her manners are quite cosmopolitan

He laughs like a donkey and farts in the bed
And flips cigarettes in the can
But she always acts nice, with no visible vice
Tell me, what does a woman see in a man?

He hangs out in bars and he tells stupid jokes
And seems to think he's a comedian
But she's clever, polite, stays sober all night
And sips on her one Presbyterian

He has a name like Duane or Leroy
Hers is Vanessa or Anne
Hers sounds like a song
But Duane is all wrong
Tell me, what does a woman see in a man?

He brags about knocking the world on its ass
But oh, when the shit hits the fan
She'll bail him out, she's the one with the clout
Only she knows how humankind ever began 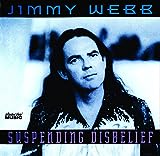 JIMMY WEBB videos - What Does A Woman See In A Man?

Related Artists
Home > W > JIMMY WEBB > What Does A Woman See In A Man? lyrics