Waiting for respect when what they wanna be is cool
Cool calm and collected just as if that isn't strange
Or they wanna blow the whistle, ring the bell and change the rules
When the game goes on forever
It's just the uniforms that change

We can make the future, make it every bit as clear
Make a friendly Star Trek universe, 'cause everything's allowed
The only place that's seriously strange to be is here
And the only time that's maddeningly mysterious is now

Come on get on board!
You don't wanna be late now... 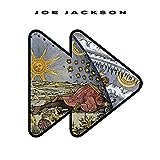