My old man had a rounder's soul, he'd hear an old freight train, then he'd have to go.
Said he'd been blessed with the gypsy bone,
that's the reason they guessed he'd been cursed to roam.

Came into town back before the war, didn't even know what it was he was looking for.
He carried a tattered bag for his violin, it was full of lots of songs and places that he'd been.
He talked real easy, had a smiling way to pass along to you when his fiddle played.

Making people drop their cares and woes to hum out loud those tunes that his fiddle bowed.
Till the people there began to join that sound, and everyone in town was laughing,
singing, dancing round.
Like the fiddler's tune was all they heard that night,
as if some dream said, "All the world is right,"

His fiddler's eye caught one beauty there. She had that rolling, flowing, golden kind of hair.
He played for her as if she danced alone, he played his favorite songs, ones he called his own.
He played until she was the last to go, stopped and packed his case, said he'd take her home.
All the nights that passed a child was born.
All the years that passed, love would keep them warm.
All their lives they'd share a dream come true, all because she danced so well to his fiddle tune.

My old man had a rounder's soul, he'd hear an old freight train, then he'd have to go.
All that I recall he said when I was so young
was no one else could really sing those songs he sung. 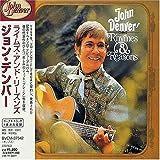