[Spoken Word: Broderick Smith]
Early that morning, the wagonmaster of the train came into the post, pretty excited and reported the dead body of a man and horse had been found in the road about six miles from the post. A company of infantry was immediately ordered out and proceeding to the spot, found the body of Sam Cherry, pinned fast to the ground by the dead body of his horse. The search was continued, and in the lateral canyon, they found the bodies of Sargent Love and the three privates riddled with bullets, mutilated and disfigured. Getting every evidence and having sold their lives as great men should, trails were examined and the whole story worked out. The party traveled along the road, nearly to the entrance of the canyon of the Olympia, then was a wild rose pass, and suddenly about 39 Indians dashed from the bushes along the stream, cutting off the retreat towards the fort, and trotted it up the lateral canyon. Suspecting a trap, Sam Cherry suddenly turned, dashed through the line of Indians, regained the road, and ran for life away from the fort, followed by a number of yelling savages. He was evidently doing well when his horse stumbled and fell, breaking his neck, bringing Sam's leg to the ground. In an instant, he was surrounded by the exact Indians. Raising himself slightly, Sam fired five shots at these Indians. Turning the muzzle against his own temple, he escaped the tortures of their vindictive rage by his last shot. The baffled and terrified Indians went away as fast as their ponies could carry 'em, not touching the body, not even taking the arms. Such is the way out in the west. People die by extreme barbaric ways. We've taken their lands, and in return they take our viscera and spread it across the desert lands 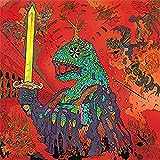