The long awaited, most accommodated
Could never fade it cuz it's always hip hop related
Wack MC's please or you'll get annihilated
The LP's and the Peoples called the Dilated
Long Awaited

[Verse 1: Evidence]
Freeze, this shit is outta control
For example, an actor who never snapped out of his role
So many try to hold me back, in the end, yo I prevail
Watch for subliminals cuz devils in the detail
2020, no doubt will be confusing
Catch the story of my life on VH1 Behind The Music
(Ladies & Gentlemen), The starting line ups at home
We got four emcees and that's five with DJ Romes

[Verse 2: Wildchild]
B-boy mission in life is to add creativity to the battle scene
Got Dilated to detonate mic weapons for mic check fiends
Yo, Evidence (What's Up?) What's that in your hand, is it a guidance
Missile?
(Yes it is) Call up ya man Rokka tell 'em it's time to blow da spot up
With metaphors, lyrically I slap MC's up with my ten inch
Pull rhymes right out my chest like Popeye does spinach
Because my song must stay strong with each bomb that we deploy
Destroy fake decoy B-boys for those who can't avoid

[Verse 3: Rakaa]
Yo if my peeps' are in the trenches then I'm where the battle is
Rakaa Iriscience A.K.A. the Catalyst
The weight of the world's on my shoulder like I'm atlas
Dealing with the villainous tactics of the facists
Real heads gotta rock the Lootpack shit
Defiant Dilated, yo I'll shoot back quick
Vocab like refugees but I call it vocap
Spit it, ventilate 'em, leave 'em laying on their back

[Verse 4: Madlib]
It's mostly snakes handing out contracts
Trying to see where I at
Innovations on the Dilated, Lootpack format
We freak the physics, break emcees on contact
Madlib don't lack, we'll be waiting for that payback
You better get hittin, your soul when I drop my compound on contact
All that played out shit will have you knocked out in the first round
'Cuz too many frauds walking around

[Verse 5: Evidence]
Yo, I take control grab the horse by the mane
I'm that New York type of driver on this L.A. terrain
Make it rain, when it pours we flood, cover your system
Intuitive, straight up, avoided you by instinct
You could take cover, dodge radar detection
But try to dodge weeded out by natural selection
It's finally here, the moment of the long awaited
We represent the West, Lootpack and Dilated

[Verse 6: Wildchild]
So, better back up cuz DJ Romes is gonna go off and
Bringing his Technics turntable style straight out of his coffin
I'll continue to pull out my menu of styles and bend you
In half then laugh on behalf of my whole Lootpack staff
Brothers be like "I wanna hear y'all ish", at least you've waited
First heard it hear, negative criticism is mad appreciated
My direction takes course of a fraudulent, fake endorserer
Thinking he's a dope rhyme style enforcerer (to the world of hip hop)
If you don't support, you're amongst those who's gonna get dissed
And dismissed when we come back with [10x] the force of a

[Verse 7: Madlib]
Earthquake, we laugh in Cali wild so watch the earth shake
From the first take, pop in your box, the Long Await
We rollin' like Jugganauts, plug in spots
Not talkin' bout runnin' Glocks preparing for incoming stocks
Yo it's the Pack with them Triple Optic kids
While we keep this art real, y'all worry bout your pocket lids 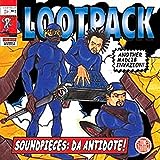