She say she doesn't want a man who leans
Still she is my Germanic Queen
Yeah, she's my Queen

The things she does, the things she says
People shouldn't treat others that way
But at first I thought I could take it all

Just like poison in a vial, hey she was often very vile
But of course, I thought I could take it all

She treats me like I am a fool
But to me she's still a German Queen
Ooh, she's my Queen
Queen ... 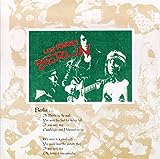