We were born during the boom times, played house down in the bomb shelter
Suffered through the wonder years, and silence at the dinner hour
But once upon a summertime, out behind the old garage
We were buzzing on midnight, Luckys and Rolling Rock
Thinking we were heroes in our own hometown
Nothing less than heroes in that old hometown

Some married on a day in June, some disappeared without a trace
And some of us are still at large, still searching for a better place
But once upon another time, it didn't matter what they said
Didn't matter if we fell behind, we'd still come out ahead
Cause we believed in heroes in that old hometown
Hey, you could be a hero in your own hometown

Now I'm long away and very far, from gazing at an evening sky
From wishing on a shooting star, from thinking that a heart can't lie
This world is gonna wear you thin, knot you up and spin you round
This world will take it's aim, call you every name, trying to bring you down 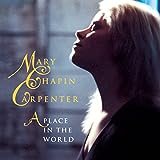 MARY CHAPIN CARPENTER videos - Hero In Your Own Hometown