[Verse One: Eazy-E]
I don't drink brass monkey, like to be funky
Nickname Eazy-E your 8 ball junkie
Bass drum kicking, to show my shit
Rap a hole in my dick, boy, I don't quit
Crowd rocking motherfucker from around the way
I got a six shooter yo I'm mean and brave
Rolling through the hood to find the boys
Kick dust and cuss crank up some noise
Police on my drawers, I have to pause
40 ounce in my lap and it's freezing my balls
Hook a right turn and let the boys go past
And I say to myself, "They can kiss my ass"
Hip to get drunk got the 8 in my lips
Put in the old tape Marvin Gaye's greatest hits
Turn the shit up had the bass cold whomping
Cruising through the east side south of Compton
See a big ass and I say word
I took a look at the face, and the bitch was to the curb
Hoes on my tip for the title I'm holding
Eazy-E's fucked up and got the 8 ball rolling

[Verse Two: Eazy-E]
Riding on Slauson down towards Crenshaw
Turned down the sound to ditch the law
Stopped at a light and had a fit
Cause a Mexican almost wrecked my shit
Flipped his ass off put it to the floor
Bottle was empty so I went to the store
Nigga on tip cause I was drunk
See a sissy ass punk had to go in my trunk
Reached inside cause it's like that
Came back out with a silver gat
Fired at the punk and it was all because
I had to show the nigger what time it was
Pulled out the jammy and like a mirage
A sissy like that got out of Dodge
Sucka on me cause the title I'm holding
Eazy-E's fucked up and got the 8 Ball rolling

[Verse Three: Eazy-E]
Olde English 800 cause that's my brand
Take it in a bottle, 40, quart, or can
Drink it like a madman yes I do
Fuck the police and a 502
Stepped in the park I was drunk as hell
Three bitches already said, "Eric your breath smells!"
40 ounce in hand that's what I got
"Yo man you see Eazy hurlin' in the parking lot?"
Stepped on your foot cold dissed your hoe
Asked her to dance and she said, "Hell No!"
Called her a bitch cause that's the rule
Boyz n tha Hood trying to keep me cool
Tell my homeboy you wanna kick my butt
I walked in your face and we get on up
I start dodging the dogs and watch you fall
Just dumb full of cumn got knocked out cold
"Make you look sick you snotty nosed prick!
Now your fly bitches all over his dick!"
Punk got dropped cause the title I'm holding
Eazy-E's fucked up and got the 8 ball rolling

[Verse Four: Eazy-E]
Pass the brew mother fucker while I tear shit up
And you all listen up close to roll call
Eazy-E's in the place I got money and juice
Rendezvous with me and we make the deuce
Dre makes the beats so goddamn funky
Do the Olde 8 fuck the brass monkey
Ice Cube writes the rhymes, that I say
Hail to the niggas from CIA
Crazy D is down and in effect
We make hard core jams so fuck respect
Make a toast all you punks to the title I'm holding
Eazy-E's fucked up and got the 8 ball rolling 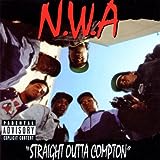