[Verse 1: Nas & Charlie Wilson]
They called me "Babyface" in eighty-eight
On 40th and Broadway they made me stay and wait
Cab service, car eighty-five
Ten minutes, they back in the car
Not safe to drive, narcos are lookin' (Woop, woop, woop)
No secret compartments in the ride, so keep pushin'
We get stopped, hide it between the seat cushion
Either that, or just tuck it inside your boot
Don't throw it out the window yet, son, that's all our loot (Not yet)
See? They turned, they wasn't after us, my nigga with me laughin' (Yeah)
He clutchin' his gold Lazarus, made it home and he baggin' up (What up?)
I'm just a lil' nigga smokin' weed (Fried)
I'm just tryna figure out who to be (Nas)
Horse and Dula touchin' paper (Uh-huh)
Plus, Spud and Wallet Head, a lot of bread
And I was talkin' to Tia
I went to her block, I was just happy to see her
And low was how she did me (Ooh)
She moved from Queens to Co-Op City (Ooh-wee)
She said, "Visit me, that's if you really miss me" (I did), show proof
Ten niggas outside her buildin', that's what I go through (Damn)
1989, my baby mind was advancin' (Yeah)
Nike Air Trainer 3's, two fingers on her hand, son (Ooh)
I'm losin' her slowly (Uh)
Plus my other girl is startin' to move on the homie
Hop in eighty-five, roll with me (Oh-oh)

[Chorus: Nas, Charlie Wilson, Both]
When I used to slide
I used to call car eighty-five
Don't want no other driver on the job (Nah)
Only car eighty-five
Yo, take me uptown to that smoke shop I like (Ooh)
Car eighty-five
All blacked out tint (Running for my life)
Everywhere we went, we took car eighty-five (Yeah, yeah)

[Interlude: Nas & Charlie Wilson]
We gon' ride
Put that tape on I like
You know that tape I like, turn that shit up (Oh, yeah)
We gon' smoke and ride (Ooh-ooh)
Go to Times Square, we take it from there
Just ride (Ridin' with car eighty-five)
It's Friday
It woulda been a good night to pick up shorty, but she on some other shit (Ooh-wee, ooh-ooh-ooh, yeah)

[Verse 2: Nas & Charlie Wilson]
In my peripheral view
Nothin' trivial 'bout me, just witness the truth, I'm certified
That's been verified
My mere presence got other guys terrified (Woah, ooh)
Slap oxygen out your esophagus (Ooh-ooh)
I survived with stick up kids, was droppin' shit (Ooh-ooh)
The rotten apple's the tabernacle
That's NY, White Castles at midnight
Fish sandwiches, forty ounces and fistfights (Oh, ooh-wee)
They even used car eighty-five to pull robberies
Use 'em as a getaway car and paid him properly
Next year the whole town strung out
Swept the block where they hung out
Look how far we've come now (Amen)
Grab the duffel and run out
Seven fiends in one house, hustle sun up to sundown
What up? Summertime in NY
In the back seat of car eighty-five (Oh-oh, oh)

[Outro: Nas & Charlie Wilson]
The whole hood was tryna call car eighty-five
Any car like that, any number that had that system
Or that cool ride (Yeah)
You know that'd make your whole day
Just bein' able to get up and go
To this day, I just like to ride
Lot of thoughts come to mind (Ooh-wee, oh, oh, ooh) 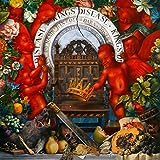