Touch up the game like a photo edit
Camera roll like Oscar Michaeux, they gotta roll the credits
Like Rome came into Kemet and they stole the essence
Before they watered it down and taught us bogus lessons
Written in stone, write whatever in your history books
Me and ancient Egyptian skin tone had similar looks
On my trip out to Cairo, I felt home on arrival
I swam in the Red Sea, took a boat on the Nile
It's in my blood to drive these cars and live this large
Escobar cigars avoiding the prison bars, Nas
I deserve the threads in my closet
Big boy deposits, Nike shares and stock tips
Catching up with those who had a head start
Used to get eviction notices that had a red mark
The lights was out, that's why we sip dark
Acting a fool at the pool in Queensbridge Park
Niggas would not survive in my hood
Pull up with all of my jewels on and Nas is good
Nas is good
My nigga, Nas is good

Ha, I love my hood so much, I go out in a blazing shootout
See I can't come out there, I'd throw it all away, fuck it
Big shout out to DU, forever
His brother Herb, R.I.P

Now y'all woke, I'm laughing at niggas
Y'all used to say "Nas talking that anti-establishment business"
Look at my settlement cases, gave they asses some stitches
Used to put bottles to faces, all we ask is forgiveness
My past story full of sins
Somehow I got a cleanse, back in 2010
Department of Justice wrote me looking for one of my friends
I ain't know where he was at, didn't even have a hint
And even if I did, a nigga'll never snitch
Cheat code, I walked into my greatness
Freak hoes throw they pussy a party, okay then
Raised by a queen, that's the only reason I made it
King's Disease the reoccurrence, that shit reinstated

[Outro:]
Death to the pessimistic mindstate
Lack of hope low-spirit motherfuckers
Life to king's getting a king's ransom, living handsome, ha
Yo Hit, we did it
King's Disease II 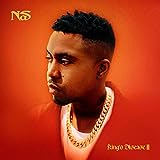