[Intro: Kenny Loggins sample]
Still somehow I believe, we always survive.. but why?

[Break]
To my dogs.. wherever you are

Whattup Big? You know shit is rough after you slid
You in God's hands now, keep a place for me kid
Ain't nuttin' changed, still Party and Bullshit
We used to fuck R&B Bitches and see who rhyme sickest
For every hit you made, more rappers afraid to come out
Machine Gun Funk, from Queens I came through to smoke blunts
You came to my hood, we was broke
I wonder if we stayed that way, would there have been gunsmoke?
Still on the block around fiends numb from coke, I guess so
'Cause now with paper, shit is still ghetto
But fuck it black, you livin' your life, through your loved ones
Peace to your daughter and your newborn son
It used to be fun, makin' records to see your response
But, now competition is none, now that you're gone
And these niggas is wrong, using your name in vain
And they claim to be New York's king? It ain't about that
It's more serious, I plan to toast it up with you
Joke with you, happy we on top, the most official
Ain't too many real ones out there, I feel some but doubt they're
Capable to take it where you took it to
I missed your wake not 'cause I'm fake
'Cause I hate to see somebody so great in that way
I woulda stayed so long with so much to say
I had to put it in writin' to keep me and Brooklyn from fightin'
Tellin' me to pay my respects and move to the side
But I probably wouldn't have got off my knees to let people by
You can't kill nothin' that's Ready to Die
You was like God to us in the form of Allah

[Kenny Loggins sample]
Still somehow I believe, we always survive.. but why?

(Thug Life never die..)
Dear 'Pac, every thug sheds a tear drop
And use teeth to bite off beer tops and Pour Out a Lil' Liquor
You was more than just the wildest nigga
2Pacalypse, I understand your style, nigga
It's goin on the third year, since you've been gone
On the East and West Coast the same shit is goin on
The industry be talkin', offendin' me often
They don't believe you dead, wanna see you in your coffin
I can relate, shootouts and court dates
All Eyez on You, niggas in your face invadin' your space
You asked if I could trade in your place, how would I hold up?
How long would I ride before I fold up?
How did you know through your rhymes it was your time to go?
You predicted it in every line, all in your flow
There could Never Be Peace I have to quote
Can't believe I heard my name on "the realest shit you ever wrote"
We had words 'cause the best supposed to clash at the top
But kept it brotherly, when we seen each other and stopped
In NYC, at MTV, people watched
We was both deep, after you left, I got no sleep
Think about how us real niggas would be
If we united, a nation of thugs, who could fight it?
You was caught in a wild homicide, or were you crucified
Like the son of God, when Lucifer lied
And make the world think, young blacks should be extinct?
But Thug Life'll never die, we stay high and just link
Will there ever be another MC as nice?
Will you return to us like the resurrection of Christ?

[Kenny Loggins sample]
Still somehow I believe, we always survive.. but why?

I wonder what the Commodores went through on tour?
Did Smokey Robinson, have to shoot his way out a war?
What has Al Green seen, that made him religious?
Was it the drugs, put an end to the music business?
If so, should I put out the indo right now and write down
A plan and pursue my dream, turn my life around
'Cause I'm bound for the movie screen, cuties that scream
I'll need a extra Uzi ridin' through my own hood in Queens
It be the ones you always knew, that want it on
Tellin' everybody it was him, that you fronted on
Thought we walked a million miles it was just twenty
Not used to walkin' in the path of legit money
I thought I made it but we only took baby steps
Up the success ladder, where they pay me checks
To my clicks when I got it I said "Baby bless"
That was the 80's, but now look at this crazy mess
We in the 90's and finally it's lookin' good
Hip-Hop took it to billions, I knew we would
A lot of ups and downs in the game
Could lose or gain a couple pounds tryin' to maintain
One day you here, the next you not; when you around niggas, check 'em out
Some is 'bout it, most individuals plots
And run the spots, some choose to stay to theyselves
While others have no cares and stay in jail
More than 50% of us endin' up with holes through the chest
Through the head, through the gut it shows
The future for us young shooters and old killers
Who become rich as dope dealers?
Nothin' left for us but hoop dreams and hood tournaments
Thug coaches with subs sittin' on the bench; either that or rap
We want the fast way out of this trap
Whether it be 9 to 5 or slangin' crack
To my deceased Gods wishin' I could bring you back
But life is a dream and y'all taught me that 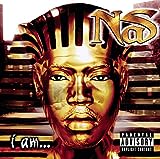 NAS videos - We Will Survive