PETER HAMMILL
"In A Bottle"

With the sense of anticipation burning on his skin
And the train of consequences running at full throttle,
Before the touch, before the kiss,
This moment just before their history begins,
He'd give anything to put this in a bottle.

Don Juan had been so careful but he let it slip
That the elixir he craved was moist upon her faithless lips
And in the hint of her perfume that lingered on his fingertips...
Distillation.

(What a slip 'twixt the cup and the lip finally...
He got the bottle, he knocked back the eau-de-vie.)

He's stripped of recollection,
He's left with no protection,
This won't come again,
Although he always knew that he'd foresee
Much more than he'd ever remember.
(This won't come again.)
Losing the thread, losing the plot,
It wasn't/not possible to stay on fire as he was then,
He'd do anything to breathe life in these embers.
(But the secret stays untold...)
He'd give anything to get life from these embers.
(and the fire has grown cold, cold, cold.)

Between the present and the past, his mouth agape
And the elixir he drained has twisted essence out of shape;
And with dark perfume he is wraithed
Now that the genie has escaped from the bottle. 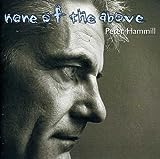 PETER HAMMILL videos - In A Bottle