Once there was a land that lived in fear of seven goblins. The goblins fed on color. They plowed the valleys and climbed the highest mountains looking for rainbows. And when they found one, they caught it in their lassoes and sucked the colors up, filling their bellies with its black liquid. Only one place in the land had never known goblin fear; a hidden valley called the "Valley of the Rainbow," where great arches of color were born. There, the animals lived in paradise.

Where visible life and cast forth the call
Of reflecting in eyes the world all around
Where spectrums can fly, the faces of creation
Rainbow hands touch the ground

The folly of those who gorge upon gnomes
With all their share of what they don't hear
Be leery of the fool, and the rainbows the rain
Filling the landscape with fear 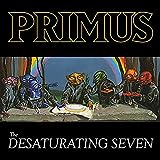