Man: "Fallout? The government director neglected to mention what it
would look like. I expect it would look a bit like snow does, only
gray. Very quiet. I expect they're all are having a good lie-in
after the bombing."

Woman: "Terrible smell of burning."
Man: "Well, yes. Well there's bound to be. That's logical..."
Woman: "It's like...roast meat."
Man: "Yes, it does. I expect everybody will be having their Sunday
dinner a bit early this week, due to the unexpected circumstances..."

Man: "A cloud coming up. Looks like rain. We'll be alright for
water now for a while, my dear."
Woman: "Do you think rainwater is alright to drink?"
Man: "Well, yes, of course it is. There's nothing purer than
rainwater, is there? Everybody knows that." 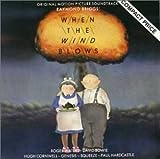