ROGER WATERS
"The Soldier Is Tired"

[Narrator]
Slogging homeward every day.
But soon, soon, very soon, he will be home to stay.
The Soldier is tired, in need of a rest.
So he throws down his pack at the side of the lane.
And proceeds to do what a soldier does best:
He starts to complain.

[Soldier]
Bloody army! I've had it up to 'ere.
I must have been mad to sign on for ten year.
Don't get me started, I might never stop.
Any road, this here's not a bad spot.

[Narrator]
He sits down at the side of the road, opens his pack and grumbles on.

[Soldier]
Always on the bloody go, broke more or less...
By heck, but my kit's in a hell of mess!
Where's my St. Joseph?

[Narrator]
He plumbs the depths of his pack
In search of a lucky medallion he has
With the face of his namesake, St. Joseph,
Neatly engraved on the back.

[Narrator]
He carries on rummaging in his bag
Pulls out cartridges, a box of matches, he rummages on.
A mirror with most of the silvering gone.

[Soldier]
Now where's her picture? That would be missed.
The picture she gave me, my girlfriend that is.
That she gave me the day I went off to enlist.

[Narrator]
He finds her picture at last! And then,
Hey diddle diddle, from right in the middle,
The soldier pulls out, an old brown fiddle.

[Soldier]
Ah! It didn't cost much, the tone is not rich.
And you have to keep screwing it back up to pitch, 'old on,
But once in tune, by God, this'n.
Well, judge for yourself.
Just sit back and listen! 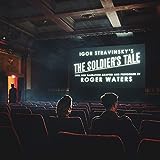