Well I rehearse and come out first and I'm number one
Not the best, not the worst, 'cause my name is Run
And I'm second, 'cause the record that you want to see
An MC (like D) is like the place to be
And have you heard that he is third, and his name is jay
I run the A to deuce, and Jay's the trey

Well the rap of the year and this is the year of the rap
And I'm never drinking beer, champagne out of a tap
And I'm cold, making money on a regular basis
Putting out, knocking out Sucker MCs faces
Travelling 'round the world with my mind at ease,
No Calvin Kleins, just wearing Lees
Got credit in places I've never been
'Cause the rhymes I write are in the top 10
The top of the charts is where I stay,
But I also chill around the way
In Hollis, Queens, is where I stalk
On the street with the beats is where I walk
When I perform, many hearts are warm
I'm better known, as the quiet storm
I don't talk too much, but I got beef
When I kill MCs I cause grief
Devastating Mic Control is my main goal
My name is Darryl, and his name is Joe
The master of music, his name is Jay
Leave us alone, and let us play
We give it up, and turn it loose
We're not like Dr. Seuss or Mother Goose
Sucker MCs like punks who are picking flowers
Go for yours, we went for ours

Start at three, end at six
Jam-Master Jay is on the mix
For all the young ladies, and all the chicks
We got all of the girls on our tips
Don't buy gold lighters, only Bics
Rock all microphones just for kicks
Sucker MCs I will be snuffin
And my pocket I'll keep on stuffin
When I say I'll beat 'em up, I won't be bluffin
They can't beef, 'cause that ain't nuthin
But it don't matter, my pocket gets fatter
I've got more hats than the Mad Hatter
I'm rapping with the mic, drive a caddie, not a bike
Drive the rhymes in your face, and end your life
D's an MC with the rhymes, no mistake everytime
Never ever going low, 'cause they only climb
And Jay's the DJ with cut, move your arms, and your butt
So D take the mic up (say what?)
I will not stop or will not quit
Because somehow at the top when I'm on the tip
That's as high on the top as you can get
And you best believe I'll be on it
So before you decide to try me out
Gonna let you all know what I'm all about
I'm a fresh MC who's on his way
To be an MC with the most to say
And to all those out there that don't know me
I go by the name of DMC
In the place to be, I will MC
The Master of a Ceremony 'cause it's easy to D
Control of the Mic is so Devastated
That all other rappers you will soon be hatin
No matter what race, creed or color
When we perform they don't get duller 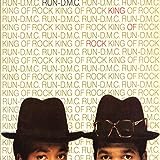