He picks up the paper in the bitter cold morning
He had just gone to sleep, he had to get up for work
By morning he's a watchman, by night he's a waitor
In the late afternoon he works as a clerk
And he can't pay the doctor bills, he just can't afford the pills
The car's repossessed, and the child support's due
But he saw the world through the eyes of a child
Big problems seemed smaller
And old things seemed new

Well, She was just six when she turned her first trick
But,now she's 13 and it don't make her sick
And she does lots of chrystal
And she owns her own pistol
Got a goldfish named Silver
And a pimp who's named Rick
And some are like customers,and some are like patients
She'd have gone back to school, if she just had the patience
She saw the world through the eyes of a child
None of the nightmares and nothing to deny
Yes she saw the world
And she's seen it all and she knows
They're all lies 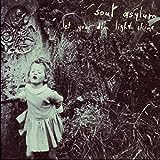