STEELY DAN
"What A Shame About Me"

I was grinding through my day gig
Stackin' cutouts at the Strand
When in walks Franny from NYU
We were quite an item back then
We talked about her films and shows and CDs
And I don't know what else
She said, yeah, Hollywood's been good to me
But tell me - how about yourself

She said, talk to me, do you ever see
Anybody else from our old crew
Bobby Dakine won the Bunsen Prize
Now he's coming out with something new
Alan owns a chain of Steamer Heavens
And Barry is the software king
And somebody told me in the early 80's
You were gonna be the Next Big Thing

We both ran out of small talk
The connection seemed to go dead
I was about to say, hey, have a nice life
When she touched my hand and said:
You know I just had this great idea
This could be very cool
Why don't we grab a cab to my hotel
And make believe we're back at our old school 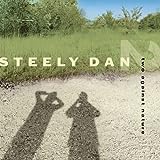 STEELY DAN videos - What A Shame About Me