Starting at the dawn of time, violence played its role
The male, the alpha, number one has controlled the tribe
Sticks and stones were used to kill, then moved on to blades of steel
Let the bodies lie, let the bloody bodies lie

Through the ages war sustained
Our final stand, unholy grail

Weapons played a major part in the fall of those who fought
The evolution of the kill, more precision more refined

What will be the final answer
Release the missile, drop the bombs
Mother earth lies devastated
Hallowed ground gets decimated

After all, every thing we do
As man evolves, so do the weapons used
Our world demise, centuries of suffering 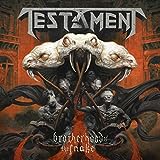