Come on down to where them tracks cross high street
You can watch the whole world go insane
See the lighters hit the rocks in the bushes
Like the stars are coming down like rain
Here she comes just a skin and bones skeleton
She's food for the crack cocaine
She got a baby living right outside the city
Man, she don't even remember his name
Well his name is Adolf Hitler, Albert Einstein, Jesse James

Laugh if you want to, really is kinda funny
'Cause the world is a car and you're the crash test dummy
Herd's stampeding now, fences gone
Television is always on - and it says
Save the children, but drop the bomb
Replace the word right now, with the word wrong
Hey there's a big sale on Tuesday, get it 'fore its gone
Get a picture with the four horsemen for a nominal sum
Now that they got everything they'd like to sell you some!

Take this pill now and put it on your tongue
Keeps you actin', just like everyone
Keeps you from feeling good, bad, ugly, crazy, dumb
It ain't a drug god-dammit! I give it to my only son!
Well, no one's gonna get arrested, no one's having any fun
Doctor's orders: you feel your heart beating go ahead and take you one!
And now you're dumber than a singin' saw
Playing uncomfortably numb
It's a thorazine work party with free fluoride bubble gum
Man you wander like a zombie out into the midday sun! 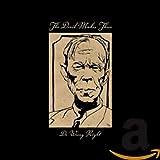