THE DEVIL MAKES THREE
"Spinning Like A Top"
(Pete Bernhard)

When I was a rover, met a four leaf clover, she was Irish as the day was long
I thought she'd give it to me maybe, now she's married with a baby, I've been dodging bullets all along
Man, we would creep but never lost no sleep, I would cut cat nip into the weed, nobody was the wiser but they could have been higher and it meant more money for me

Here's to not getting caught, doctor it's only a graze
Spinning like a top, running like a villain and the years are going by like days

School bus, I got on it, I was nearly catatonic,
I couldn't speak a goddamn word Homeroom class, forge a hall pass and we would get higher than the birds
My foolish nature, the chase for the paper, I would deal in the broad daylight
18 years old, head full of psilocybin and howling at the moon all night

Small town shadows, clean out of sight, nothing to fear but the coming of that morning light
Ducking and dodging and diving for that rent, if it couldn't be broken, it could be bent

Washing dishes, stealing kisses, making our deals on the side
She said are you ready honey, we got gas money, going on a real long ride
Lying like a rug, prescription drugs, old guitars, new girlfriends
Everybody shunned me, I just thought that it was funny and I'd do it all over again 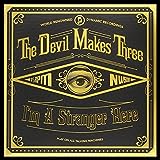 THE DEVIL MAKES THREE videos - Spinning Like A Top