THE WHO
"It's Your Turn"

Up here on the ledge
I'm getting pushed to the edge
People line up behind me to step into my shoes,
Up here in the precipice
I'm getting close to my nemesis
People fighting each other to jump into my blues

There's a young kid inside me somewhere
He stays up all night, a vampire that never dies,
With the blood and the moon in his eyes
I hear his voice when I'm comin' down,
Sleep is for fools, whe never see the sunrise,
Who never get to live twice.

I was a face in a magazine,
When you were still playin' with your plasticine,
Now you're doggin' my tail, ridin' the slipstream,
You can take the fans and the enemies
The little girls who squeeze and tease
Then pass on their social disease,
Go get your penicillin.

There's a stranger inside me somewhere
That shadow behind me, don't even look like me.
An echoed apology.
He's a wolf in sheep disguise,
I wake up in places I don't even recognize,
Pretender in paradise.

It's your turn, step up and take it
If you've got the guts to hang on
You can make.
C'mon, c'mon, come on,
Ooooh take it! 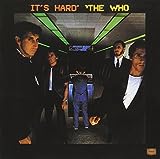 THE WHO videos - It's Your Turn

Related Artists
Home > W > THE WHO > It's Your Turn lyrics